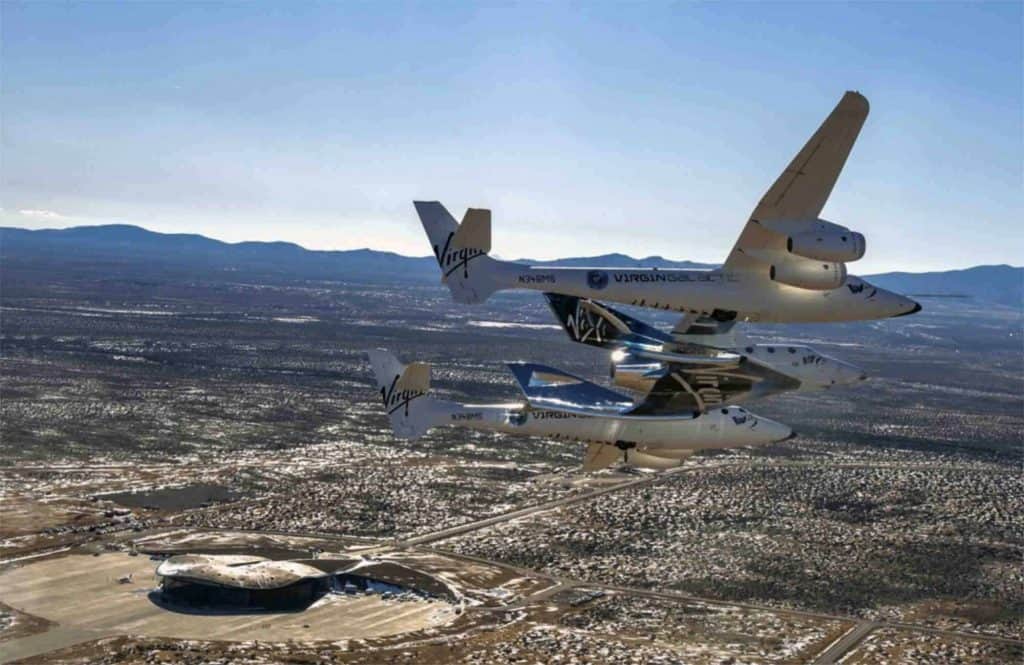 LOS ANGELES (AP) — Virgin Galactic’s spaceship VSS Unity, tucked under the wing of its special carrier aircraft, took a long-awaited ferry flight Thursday from Southern California to its new home in the New Mexico desert, where it will undergo final testing in preparation for commercial operations that will carry tourists on hops into space.

The mothership, named Eve, took off from Mojave Air & Space Port and circled over the Mojave Desert before turning east toward Spaceport America in southern New Mexico. The flight lasted more than three hours, giving pilots a chance to evaluate the spaceship at high altitude and cold temperatures for a prolonged period of time.

The move to New Mexico marks a significant milestone toward commercial flights, which the company anticipates this year.

“We have a lot of work to do, but the significance of this day is massive and what inspires me is really the idea of the having the spaceship flying free over the New Mexico skies,” CEO George Whitesides told The Associated Press in an interview. “That’s what we’ve all been working for for a long time and today was a crucial step toward that.”

Virgin Galactic now has about 150 employees in New Mexico and last year inaugurated a program to prepare its first customers for the experience. The company in August debuted its astronaut lounge and mission control at the spaceport.

Virgin Galactic is the anchor tenant of the taxpayer-financed Spaceport America — the world’s first facility designed and built specifically for launching commercial passengers and payloads into suborbital space.

The idea was first hatched some 15 years ago by British billionaire Richard Branson and former Gov. Bill Richardson to build a spaceport in New Mexico and launch paying customers into the lower fringes of space where they could experience weightlessness and get a view of the Earth below. Efforts to get the project off the ground has spanned three gubernatorial administrations.

Gov. Michelle Lujan Grisham, who is in her second year leading the state, congratulated Virgin Galactic and said she was glad to have them in New Mexico.

“We will have a genuine Space Valley in southern New Mexico, a hotbed of innovation and achievement and space tourism development,” she said.

More than 600 customers from 60 countries have put down deposits for flights with Virgin Galactic and over the last year, more than 3,500 people have registered their desire to fly. Virgin Galactic officials expect that interest will surpass the company’s capacity for flights at least through 2023.

The company says its spaceships also will carry experiments that require several minutes of microgravity.

Virgin Galactic reported progress in the construction of the next two spaceships, which are being built at Mojave.

The winged rocket ships are designed to be carried to high altitude by the mothership and released. A rocket motor will then propel the spaceships for a brief period before they glide back down to the runway.

Founded by Branson, the company is now formally named Virgin Galactic Holdings Inc. and went public on the New York Stock Exchange in October. The fleet is being manufactured by The Spaceship Company, a wholly owned subsidiary.