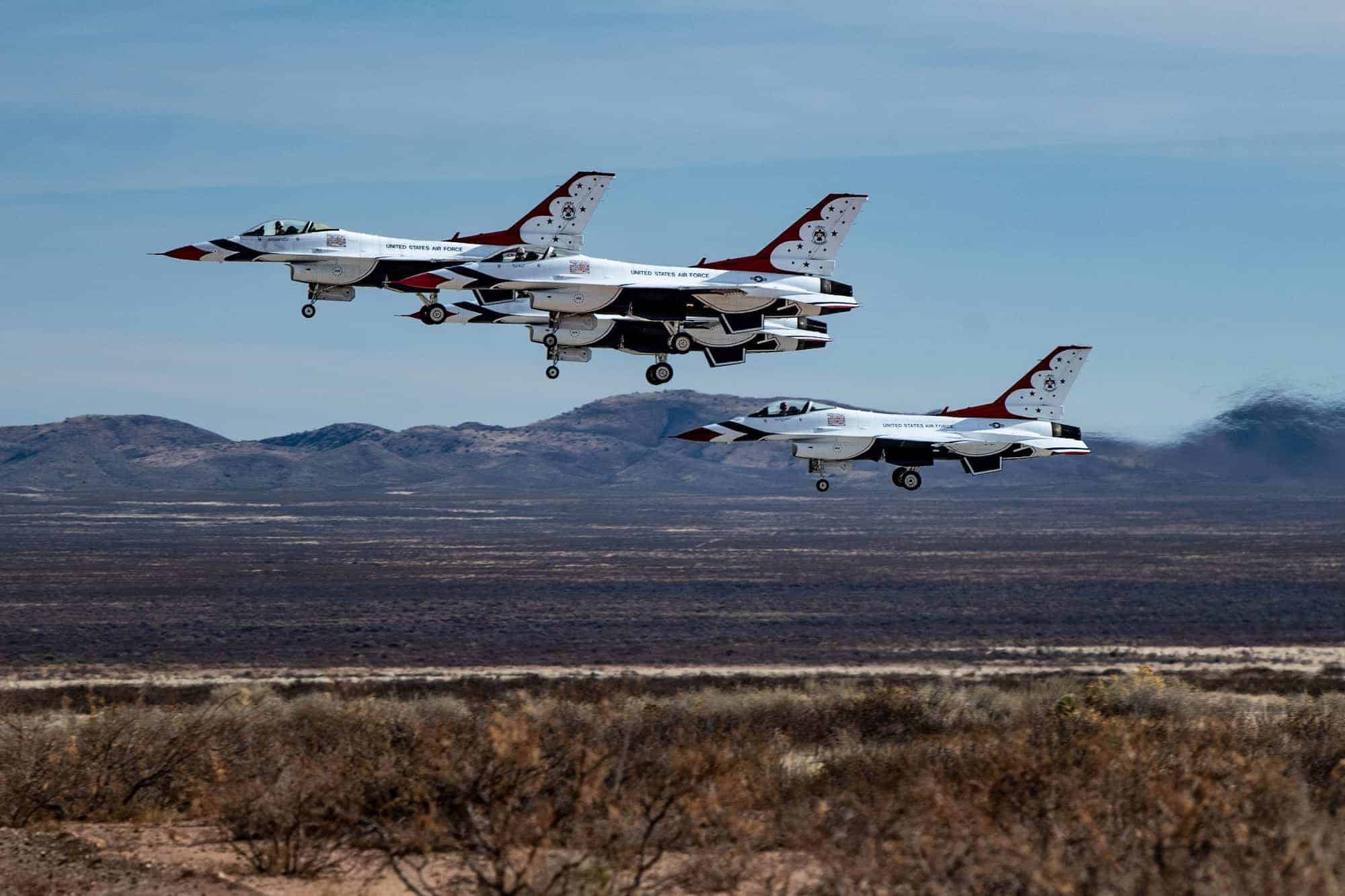 The Thunderbirds’ training season, ranging from November through March, is a time to integrate and synchronize as a team and practice the demonstration. This year, the month-long winter training trip will take place in two locations: Truth or Consequences, N.M.; and Fort Huachuca, Ariz.

Leadership from the Thunderbirds and the 57th Fighter Wing made the landmark decision to have an off-station winter training trip after assessing multiple locations based on aerospace availability, geographical location, and site surveys. In previous years, the Thunderbirds hosted training at their home base, Nellis Air Force Base, Nev.

“This is our top priority for the 2022 training season. It’s crucial that we take advantage of this unique opportunity to set the tone for our 2022 show season and future training seasons,” said Lt. Col. Justin Elliott, Thunderbirds commander and leader.

The move was made to increase aerospace opportunity and flexibility for the team’s training needs, while also allowing them to practice in conditions of increasing difficulty.

“These two locations are excellent training environments, each serving different purposes,” Elliott said. “The show season subjects the team to difficult and ever-changing environments both in the air and on the ground. Training in new and different environments will allow the team to exercise the necessary muscles to ensure our demonstration is precise despite changing conditions.”

The team’s first training site is Spaceport America, located just outside of Truth or Consequences. The location boasts 6,000 square miles of restricted airspace, low population density, a 12,000-foot runway, and 340 days of sunshine and low humidity. These favorable conditions, along with entirely dedicated airspace, allow the team to hone the demonstration before moving on to more challenging flying conditions and time constraints like they might see during the show season.

After two weeks the team will move on to Fort Huachuca, home to the U.S. Army Intelligence Center of Excellence, the U.S. Army Network Enterprise Technology Command (NETCOM)/9th Army Signal Command and more than 48 supported tenants. Fort Huachuca is comprised of 946 square miles of restricted airspace and three runways, as well as a mild winter and low humidity. This location, with many mountains close by, will challenge the demonstration team in flight with different conditions, visuals, and a more rigid flying schedule like those they’ll see during the show season.

“We are extremely thankful for our hosts and counterparts at Spaceport America and Fort Huachuca. This is a first for the Thunderbirds and it wouldn’t be possible without their partnership and support.”

After the inaugural training trip the team will continue on to train with the U.S. Navy Flight Demonstration Squadron, the Blue Angels, at Naval Air Facility (NAF) El Centro, California, to exchange best practices and lessons learned in preparation for the 2022 show season.

For more information on the Thunderbirds, visit airforce.com/thunderbirds or follow on social media @afthunderbirds.